Over the years, I’ve been asked various questions about Valerie, the incident, the people who helped, my children, etc. During the writing of this book, editors and beta readers also asked follow-up questions, so I collected the questions and wrote answers to them.

Did Valerie ever mention her fear of the trip the next day or any time during your travels?

No. I wish now I would have said something and discussed it. We were happily enjoying the busy trip, and it never came up.

When did you find out that Jenn was initially blaming herself for Valerie’s death?

Not until years later. I first found out in 2008 when I started to discuss the book with her. However, it wasn’t until I conducted another round of interviews with her that she told me how intense her feelings were regarding this subject.

When Val had trouble locating your watch on the nightstand, did you have any thoughts that something might be wrong with her at that time?

There was no light in the room, so I didn’t think it was that unusual. It was actually somewhat funny when items kept falling off the table and hitting the floor. In retrospect, I’ve wondered if I might have missed a warning sign.

Do you think that Ludovic and Julie knew from the very beginning that Valerie would not make it?

If they did, they did not show it to me. I have not asked them that question.

Were you prepared to have an autopsy completed in Guatemala?

I so desperately wanted to find out what had happened to Val that I wouldn’t have given it much thought. It was Dr. Carlos who insisted that the autopsy should be performed back in the States.

Were you concerned that your children might find out what had happened to Valerie prior to you telling them?

I certainly did not want them to find out, but I didn’t think anyone would contact them directly. It would be very different now with the reach of social media.

Did you think to tell Susan that the Guatemalan funeral home would be sending blood along with Valerie?

It never crossed my mind. I assumed this was typical of what was done. Susan sent the bottle of blood along with Val’s body to the medical examiner, but from my discussions with them, I don’t think they even opened or examined the bottle.

Why did you say the purpose of your life became clearer after you read Jeff’s journal describing your conversation with Valerie?

My life had changed dramatically, and I wasn’t sure what I was doing half the time. It was about instincts and just doing what I thought I needed to do. Sometimes it took going down an unhealthy path before I realized I needed to change. Reading Jeff’s journal helped me understand many of my actions. It was an affirmation of what I was doing. 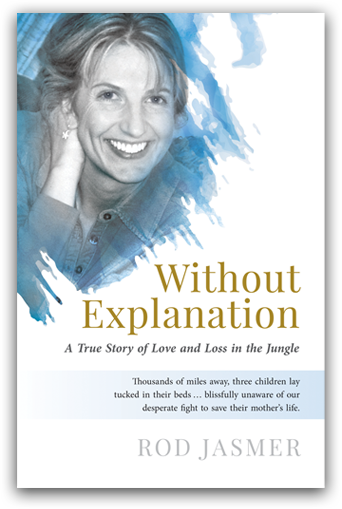 Without Explanation, and everything that it encompasses, has been a significant part of my life for many years and I’d welcome sharing it with you. Whether you have a question about the book, would like to share your own personal experience with an unexpected or tragic loss, or just want to say hello, I’d love to hear from you. Contact ROD JASMER

Get on the list for future events and book releases.